The Australian Plant Phenomics Facility’s (APPF) Dr Trevor Garnett and Dr Xavier Sirault are delighted to have been invited as a feasibility evaluation experts to review the Nanjing Agricultural University’s (NAU) plans for a new high-tech Phenotyping Research Centre later this month.

While in Nanjing, China, they will also give a talks at a phenotyping workshop at NAU and are invited guests of the Modern Agricultural Science and Technology Conference. Dr Garnett and Dr Sirault will return again to Nanjing in March 2018 as a keynote speakers at the 2nd Asia-Pacific Plant Phenotyping Conference.

The APPF is a distributed network of national research infrastructure platforms that offer open access to plant phenomics technologies and expertise not available at this scale or breadth in the public sector anywhere else in the world. We provide state-of-the-art plant phenotyping tools and expertise to enable academic and commercial plant scientists, from Australia and around the world, address complex problems in plant and agricultural science.

Dr Garnett is Technology Development Director at the APPF’s Adelaide node, based at the Waite Campus of the University of Adelaide. There, he is implementing new phenotyping technologies for the Australian phenomics community, such as hyperspectral imaging in controlled environments and the field, field phenotyping using UAVs and ground based platforms, and root phenotyping. Dr Garnett is also the Phenomics Program Leader of the Australian Research Council Industrial Transformation Research Hub for Wheat in a Hot and Dry Climate. His research interests include nitrogen use efficiency in cereals. (Dr Garnett is pictured above, talking with His Excellency Mr Mohamed Khairat, Ambassador of The Arab Republic of Egypt in the APPF’s DroughtSpotter).

Dr Sirault is Director of the APPF’s Canberra (CSIRO) node where he is responsible for its operational management, international engagement and transfer of its technology to industries. In parallel to this role, Dr Sirault works as a Senior Research Scientist for CSIRO Agriculture and Food. His research aims at understanding the factors that regulate and limit photosynthesis in crop plants, and in particular, how these factors influence plant growth and performance. Dr Sirault is also Vice Chair of the International Plant Phenotyping Network where he hopes to spearhead the development of solutions for maximising data inter-operability and data re-use globally. (Dr Sirault is pictured below, welcoming His Excellency Maithripala Sirisena, President of Sri Lanka, and his delegation).

NAU is one of the earliest institutions of higher agricultural education in China and a national key university under the Chinese Ministry of Education. A 2012 analysis of research citations by Thomson Reuters Essential Science Indicators found NAU among the top 1% of institutions in the fields of Agricultural Science, Plant & Animal Science and Environment/Ecology. Building on its century-long history, NAU is today pursuing a strategy of developing into one of the best agricultural universities in the world. The main campus of the university is situated in Weigang, in the picturesque eastern part of Nanjing near the UNESCO World Heritage Ming Imperial Tombs and the Sun Yat-sen Mausoleum. (NAU is pictured below). 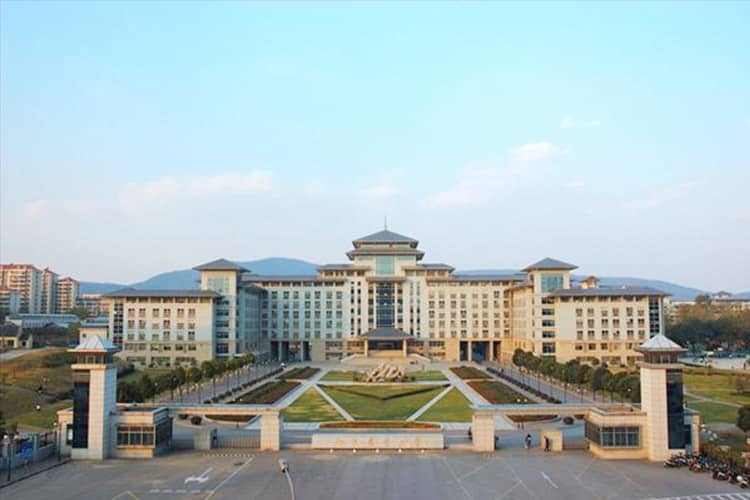