Research in a new paper shows that the interaction of plants and soil fungi – mycorrhiza – does not always benefit the plant.

Beneficial soil microbes such as mycorrhizal fungi help to improve plant nutrition and growth, especially under stressful conditions such as soil nutrient deficiency. However, under certain conditions, these specialised fungi that are normally beneficial to plants can actually have a detrimental effect on plant growth and induce so-called growth ‘depressions’.

To better understand arbuscular mycorrhiza (AM) functioning and the role of the plant-fungus interaction more broadly, we need to understand the causes and development of mycorrhizal growth depressions, and the interacting factors.

“In what we believe to be the first application of high-throughput phenotyping (HTP) of this type in studies of AM, we examined the special conditions in which plant growth depressions occur in a vegetable crop (tomato), a cereal crop (barley) and a pasture legume (Medicago truncatula)”, said Stephanie Watts-Williams, who led the research at the University of Adelaide.

“We looked at the effect on AM fungal inoculation on the shoot biomass and the interaction of mycorrhizal growth responses with plant-available soil zinc (Zn) and phosphorus (P) concentrations”.

Tomato and barley are different from most crops because they generally don’t grow better when associating with the fungi, but they do still take up more nutrients. Medicago truncatula on the other hand normally grows extremely well with the fungi, but when the concentration of phosphorus in the soil is high, the fungi become a burden and can prevent the plant from growing well. 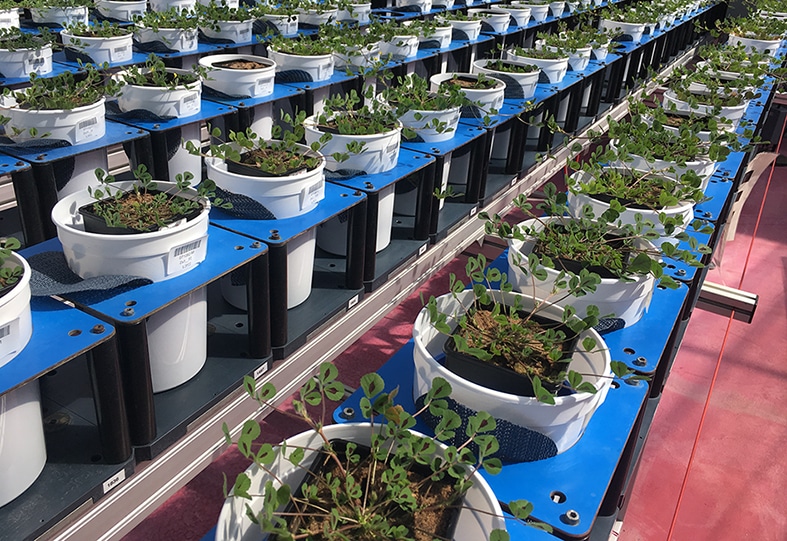 “Using HTP technology at the Australian Plant Phenomics Facility allowed us to track the effects of mycorrhizal fungi on plant growth over the life of the plants, rather than just at the time of harvest. We discovered that depressions in growth appeared at different times for each plant species; tomato was the youngest plant to show a growth depression, and Medicago truncatula was the oldest”, Stephanie added.

“Our results illustrate how context-dependent mycorrhizal growth responses are, particularly in terms of plant species, time point, and soil nutrient (P and Zn) availability, and the value of HTP approaches for exploring the complexity of these responses”.

In the context of farming, these results highlight that management practices such as application of superphosphate to the soil and choice of crop, play a huge role in determining whether mycorrhizal fungi will be a benefit or detriment to the growth of the crop.