There are many ways to learn about and develop skills in plant phenomics. The APPF offers Postgraduate Internship Awards, assistance in accessing our facilities, as well as research publications, events and network linkages, and teaching resources.

The APPF is committed to facilitating world-class plant phenomics research. To assist with access to our state-of-the-art plant phenotyping technology and growth environments, we offer support to postgraduate students from varied disciplines to access the very best tools and experience to accelerate their research.

The Postgraduate Internship Awards (PIA) involve students joining the APPF team as interns, learning about experimental design, and image and data analysis, as they undertake collaborative projects using our cutting-edge plant phenotyping technology. This is an excellent opportunity for students to investigate their plant science questions with the support of the highly skilled APPF team. 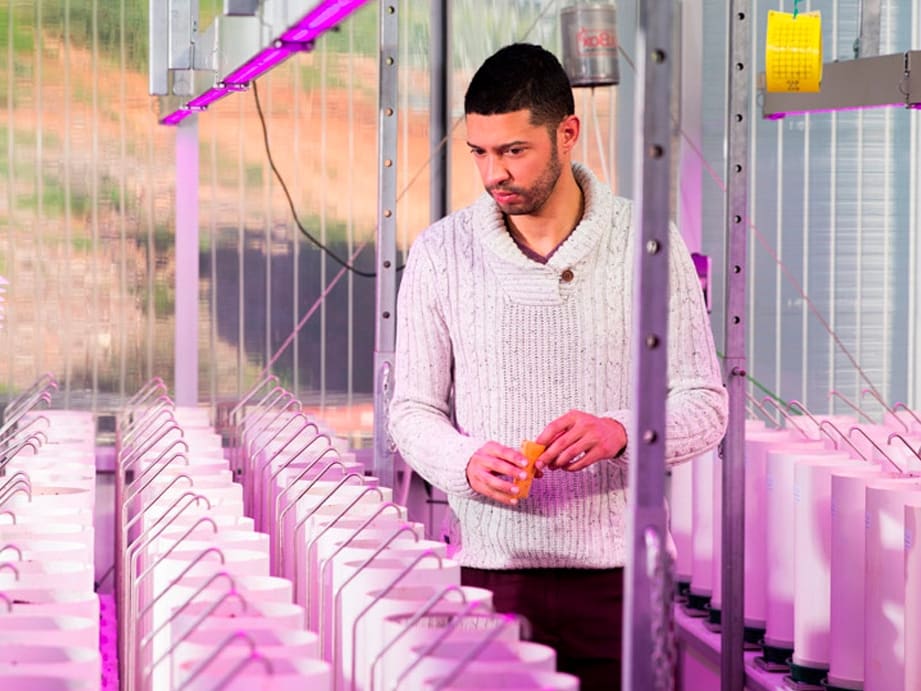 Phenomics is an area of biology concerned with the measurement of phenomes — the physical and biochemical traits of organisms — as they change in response to genetic mutation and environmental influences. The phenome being all the possible phenotypes of an organism and the phenotype being the observable characteristics of an organism.

Captured phenomics data enables the more rapid discovery of molecular markers and faster germplasm development, aimed at improving crop yields including the tolerance of major crops and other agriculturally important plants to biotic and abiotic stresses such as drought, salinity and a broad spectrum of plant diseases.

Plant phenomics specifically was defined by Furbank and Tester (2011) as:

“Plant phenomics is the study of plant growth, performance and composition. Forward phenomics uses phenotyping tools to ‘sieve’ collections of germplasm for valuable traits. The sieve or screen could be high-throughput and fully automated and low resolution, followed by higher-resolution, lower-throughput measurements. Screens might include abiotic or biotic stress challenges and must be reproducible and of physiological relevance. Reverse phenomics is the detailed dissection of traits shown to be of value to reveal mechanistic understanding and allow exploitation of this mechanism in new approaches. This can involve reduction of a physiological trait to biochemical or biophysical processes and ultimately a gene or genes.”

See this video from the European Infrastructure for Plant Phenotyping (EMPHASIS) which explains what plant phenotyping is.

A whole range of people carry out phenotyping, even if they don’t call it that. Plant breeders, farmers, growers, agronomists, viticulturists, plant scientists, ecologists and environmental scientists all do phenotyping in various forms.

The recent interest in phenomics has been in part due to the rapid development of the other -omics technologies: genomics, metabolomics, transcriptomics, and proteomics. The cost of these technologies has decreased enough to allow routine use, which has in turn led to a “phenotyping bottleneck”, a need to be able to better understand gene function and plant response to environment.

However, phenomics has been around for a long time and is fundamental to plant science. There are very few papers published by plant scientists that don’t incorporate some phenomics (e.g. plant biomass measurements). Precision agriculture is heavily dependent on measuring plant performance. Growers are increasingly using new technologies to measure plant growth and yield. Plant breeders are dependent on good phenomics in measuring yield and quality traits in new varieties.

Plant phenomics is a science that has the power to transform our lives. By exploring how the genetic makeup of an organism determines its appearance, function and performance, phenomics can help us tackle these pressing challenges.

With a rapidly growing world population, a transformational advance in grain production must occur to increase yield by 50-60% to meet projected global food demand. Groundwater sources are declining around the world, increasing soil salinity and causing losses in crop production and grazing land in many countries.

Australia is in an outstanding position in plant science. Australian agriculture is amongst the most innovative in the world and has tremendous growth opportunities, and Australian farmers are highly qualified and eager to adopt novel systems for efficient and sustainable farming. This is an exciting time for plant phenomics and plant science.

Humanitarian
According to the Food and Agriculture Organization of the United Nations (FAO), an expected population increase to 9 billion by 2050 will require our food production to double. As one of the most food-secure nations in the world, Australia will need to play a major role in contributing to food production demand.

Nutritional
Malnutrition and undernutrition as well as overweight and obesity impose high economic and social costs on countries at all income levels. Whilst the human and social consequences of poor nutrition are immeasurable, the costs of undernutrition and micronutrient deficiencies are estimated at 2-3 per cent of global GDP, equivalent to US$1.4-2.1 trillion per year. The economic costs of overweight and obesity were estimated by the FAO to be about US$2 trillion in 2013.

Environmental
Crop production is aimed at increasing the quality and quantity of yield. This is a major challenge in the face of climate change, declining arable land and biotic and abiotic plant stresses. In addition, the overuse of fertilisers is causing environmental pollution. Watch this short story to learn more about the challenges of developing plant varieties that can better cope with drought and salinity.

Economic
Australia is one of the most food-secure nations. Australian Government statistics tell us that approximately 60% of our food production is exported to other countries. The food production export value in 2011/12 was $30.5 billion.

The Plant Phenomics Teacher Resource provides background knowledge about plant phenomics research and technology for upper secondary school teachers. The resource describes current Australian plant phenomics research and the technology behind the research, in the form of short background ‘briefing notes’ with accompanying images. We hope it helps you create interest among your students in this new and important field of science.

Can’t find what you are looking for?  Contact us.

Our team of specialists are sure to have a solution.